I first met Nathan Hamill in 2010 at the San Diego Comic Con.  That year the then-burgeoning toy designer had already debuted his creation “Boris the Raccoon” and was following up with a second design titled “tyrannoCECILrex.” He’s since gone on to create several toys and characters, the most recent being “Lavabear” which will be celebrated at a launch party this Saturday. The party will be hosted by 3D Retro Toys in Glendale, CA.

I recently caught up with Hamill to talk about “Lavabear”, his creative process, his favorite toys, and whatever happened to his plans for a “Hamill Land” theme park:

Geek To Me: Since we last spoke a lot has gone on with you! Care to bring us up to speed?

Not to be confused with “Frozen” by the way. Some little Disney flick.

You know…just keeping it going.

Geek To Me: Your toy designs began with Boris the Raccoon, made a splash with Bellicose Bunny, and now we can see Lavabear traveling the world! Where do the ideas for the designs come from? 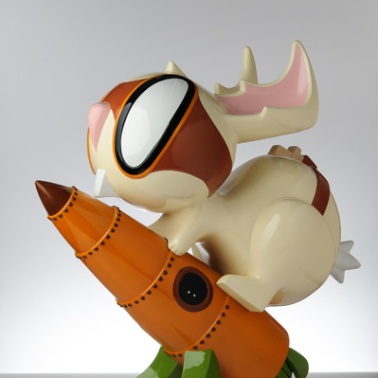 Nathan Hamill: It’s an evolution of my tastes and wherever I am in life really. It’s what I know. It’s what I love most. I let the design or ideas flow naturally without over-thinking it too much. That, for me, that will inhibit the process and end result.

Geek To Me: How has the process of creating these characters changed for you over time, if at all?

Nathan Hamill: That’s a tough one. I think I’ve become more abstract. Not a lot of that stuff has seen it to the 3D world but maybe someday things will get weirder.

Geek To Me: What is it that toy designers hope to accomplish outside of creating a fun toy? What is the most rewarding part of it?

Nathan Hamill: I get to add them to my collection.

Geek To Me: Was there anything about the process that made creating Lavabear different from your previous efforts? How did the collaboration go?

Nathan Hamill: It was originally designed for another company with it being a sofubi (soft vinyl) in mind. 3DRetro really liked the piece though and it ended up there.

Lavabear is big too. 8 inches tall and with some mass. Look at those guns! And that rump!

Nathan Hamill: Yes, absolutely. Lately I’ve been listening to everything from Nintendo Podcasts to the new Shellac. It’s better than watching movies too, since you don’t have to look up!

Geek To Me: How does social networking factor in to marketing your creations? Do you find that you get the best response on Twitter? Facebook? Tumblr?

Nathan Hamill: Instagram lately. But I use all of those. They all play a part. Find your preferred social media and I’ll bug ya there!

Geek To Me: I hear that you’re having a launch party coming up? Will this be a local event or will people be able to participate online?

Nathan Hamill: It’s at 3DRetro in Glendale, CA. (on October 4th). Don’t think there’s an online component. But Lavabear will be showing up in stores soon after. Just look for your friendly neighborhood vinyl toy shops or 3DRetro.com.

Geek To Me: Outside of your own creations, who is your favorite cartoon character?

Nathan Hamill: That’s a tough one. Um…Daffy. When he was really daffy.

Geek To Me: Most treasured toy growing up?

Nathan Hamill: First thing that comes to mind is that Slimer toy with pizza and other food. I’d take it with me to pizza places when I was a kid in NYC. Still have it!

Geek To Me: Finally, how are plans for Hamill Land coming along? What rides should I be looking forward to experiencing?

Nathan Hamill: It was shut down in Europe for reasons I can’t talk about just yet but I’m hoping that we can reopen a new park on a barge in international waters soon.

You can meet Nathan Hamill at the LAVABEAR RELEASE PARTY