Fans of the fairy-tale film “The Princess Bride” won’t soon forget Cary Elwes and his character “Westley”, the farm-boy who won the heart of Robin Wright’s “Buttercup” with three words: “As you wish.”

But Elwes himself will admit that he wrote his book “As You Wish: Inconceivable Tales From The Making Of The Princess Bride“ because he was afraid that his own memory would fail him eventually. 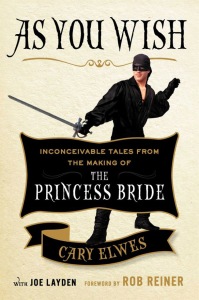 always wanted to write something, I didn’t know quite what.” Elwes explained as we spoke via telephone. “And it was the 25th anniversary that we had at Lincoln Center in 2012, we were all asked ‘what was the best memory’ for me.

“And I really couldn’t put it down to one moment or one scene, or anything. For me the whole experience was so joyful. And that’s why I wanted to write the book and share that joy with the fans before the memory started to fail.”

While he did keep a short video diary, which became an “extra” on “The Princess Bride” anniversary DVD release, he hadn’t kept notes during the film’s production.

“I didn’t keep a diary or a journal, which I wish I had now in hindsight,” Elwes admitted. “Luckily Norman Lear gave me all the call sheets for the film, and I went through them all and I started to remember exactly where I was each day.”

The book took eight month to write, but only because other responsibilities got in the way. “I was working in the movies while I was writing it,” the actor recalled “I don’t recommend it.”

He then laughed and conceded, “it’s a champagne problem.”

The film has so many quotable lines, but when pressed Elwes admitted: “My favorite is ‘anybody want a peanut?’ I don’t know why it always gets me every time. I love it.”

And what about that dialogue? Elwes jumped at the chance to work with a script by William Goldman.

“(David) Mamet and (Aaron) Sorkin and all those guys, they all look up to Goldman.” Elwes said, “He’s really the patriarch of screenwriters, I mean he really is. I think he’s a national treasure. ”

“I grew up with him.” Elwes explained,”He loomed large in our house because both my father and my stepfather were both fans of Goldman’s. My father loved ‘Butch Cassidy (and the Sundance Kid).’ And so did my stepfather. So he was kind of already an important figure in my psyche as a kid growing up, yeah?”

“And so I was given the book to read by my stepfather when I was 13, and I loved it. I thought it was brilliant. So funny, so inventive and new. Different in the way he wrote. The way he writes – Goldman – it’s like he’s chatting with you, you know? You feel like you’re having a conversation with the guy. And he’s an amazing talent.”

“So you could imagine the excitement getting offered the part. You get to work with Goldman who wrote ‘Butch Cassidy’, ‘All the President’s Men’, ‘Marathon Man’; and here’s Rob Reiner coming off of ‘Spinal Tap’, ‘The Sure Thing’ and ‘Stand By Me’. A tsunami of talent I’m surrounded by.”

“All the actors too, my co-stars, unbelievable. Unbelievable talent.”

Elwes is quick to share the credit for the book with his co-stars and co-writer. “I can’t take all the credit. I wrote it with a guy called Joe Layden who’s a wonderful writer, but I also share it with the filmmakers and the cast. They all agreed to be a part of the book which is great.”

When asked about the secret to his enduring boyish good looks, and whether he discovered a fountain of youth like “Karate Kid” star Ralph Macchio, the actor laughed. “That’s hilarious! Me and Ralph! Well he was born with a baby face, so ask him. He was truly blessed with incredible genes. I’m getting on now, so…it’s work. [laughs] You work at it, you know?”

And what does he see when he watches the aforementioned anniversary DVD and the performance of his younger self?

“Well, I look at myself and I see kind of a bit of a green actor,” Elwes admitted, “a little bit of a novice there, I think I was probably very earnest, yeah? Probably too much so. ”

“With hindsight is 20/20, with age comes wisdom and all those great things, you know? It’s weird looking back at yourself. For me I can only see my mistakes, the flaws, that’s just me.”

When asked about the recent resurgence in the fantasy genre in movies and television, Elwes turns wistful. “I think that people, when they switch on their television and they get the news, it’s so depressing nowadays with what’s going on in the world, I think people like escapism. I really do. Some folks like to go and see superheroes and see us crushing the enemy with our super powers; and they also want to go and escape and be lulled into a fantasy life that’s – how should I put it – less violent, I guess?”

But how does he account for the allure of “The Princess Bride” and the movie’s portrayal of a “perfect love”? Isn’t it overly romantic?

“You know what Goldman’s quote is, right?” Elwes countered, ” ‘The cynics are simply thwarted romantics.’ And I happen to agree with that statement. I think that we could use romance in the world. I think it’s a good thing.”

Knowing that I’d never get a chance to ask the question again, I had to ask Elwes about Boba Fett using his line “as you wish” in “The Empire Strikes Back”. Was the Mandalorian Bounty Hunter trying to say something to Darth Vader that we all missed?

Elwes laughed. “You’ll have to ask Boba or Darth.” He joked before pointing out one of the connections between “The Princess Bride” and “Star Wars.” “It might have been a little tip of the hat to Bob Anderson and Pete Diamond who were the trainers for Mandy, myself and Chris Guest on ‘The Princess Bride’ and also choreographed all the light saber sequences for the first three Star Wars films. So it could be that, a little tip of the hat from Lucasfilm to them.”

Finally, I had to ask Elwes if he could step back into character as Westley and give me some romantic advice. How could I – or any hopeless romantic – find true love?

He then took a long pause before answering: “It’s the three words, you know? I think that’s it.” Elwes concluded. “You can’t go wrong with those three words. Use them in the right context, you know?”