Gary Whitta is no stranger to the realms of fantasy. The acclaimed screenwriter first made a name for himself by penning the script to “The Book of Eli”, a post-apocalyptic tale that starred Denzel Washington. He has written for acclaimed game-maker Telltale Games‘ “The Walking Dead” series; and recently made a splash when he was tapped to write the screenplay to “Star Wars: Rogue One”, one of the Star Wars Anthology films that is currently in production. (He has since written a script for the animated television series Star Wars: REBELS.) Whitta has now transitioned into the realm of prose, having just released his first novel titled “ABOMINATION.” 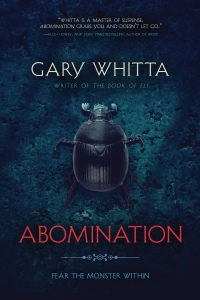 “ABOMINATION” tells the story of Wulfric, a knight from England’s Dark Ages, who after fighting a war against his country’s enemies, finds himself battling the forces of darkness. It’s a story where the reader travels to some very dark places that Whitta has created, with elements of horror, action and (thankfully) humor that keeps you turning pages until you get to the last one.

After having a copy of ABOMINATION sent to me by his publisher, Inkshares, Whitta and I corresponded via e-mail to discuss the book; where the idea came from; how he explores themes of faith and fear; how Whitta would cast the ABOMINATION movie; and his involvement with Star Wars: Rogue One:

Continue reading after the jump!

END_OF_DOCUMENT_TOKEN_TO_BE_REPLACED

If you ask me, Dan Wallace is living the dream! As the author of such geek-tastic tomes like “The Jedi Path“ and “The Iron Man Manual,” he has gotten to play with some of the most iconic characters in pop culture.

Now, after giving readers a look at what it’s like to become a Jedi Knight (or follow the path to the Dark Side in “Book of Sith“) he delves into the life of an Imperial recruit in “Star Wars: Imperial Handbook.”

Corresponding via e-mail, Wallace and I discussed what it’s like working in the Star Wars Universe; how Stormtroopers really aren’t clones; and who would win in a face-off between Darth Vader and Iron Man:

Geek To Me: Let’s get some of the basic fanboy stuff out of the way, shall we? How long have you been a Star Wars fan?

Dan Wallace: Since forever! I had the toys, memorized lines, the whole deal. I’ve soaked in Star Wars pretty much my whole life, so to have a chance to contribute a tiny piece to it in my own way is just the best.

Geek To Me: Of all the characters in the saga, which one really resonated with you the most?

Dan Wallace: Personality-wise, I’m most like C-3PO. Not particularly heroic, obsessed with minutiae and procedure. But from a favorite character standpoint I’ve always liked Lando Calrissian. He’s like Han Solo but with a lot more suaveness and gambling skills. Lando is 20% James Bond.

END_OF_DOCUMENT_TOKEN_TO_BE_REPLACED

When we last spoke, Todd Allen was in the middle of making revisions to his book “The Economics of Digital Comics.” First published in 2007, Allen set out to explore the developing landscape of the “webcomics” field and help fans (and creators) understand where and how money was being made.

A lot has changed since then and Allen set out to address those changes when he completed the newest revision in 2014. The book has been met with praise, winning the endorsement of Thrillbent.com founder Mark Waid (Kingdom Come, Insufferable) who also wrote the forward.

I caught up with Allen as he was preparing to send out some Kickstarter editions and returning to his duties as comics market analyst – and all around gadfly – at The Beat:

Geek To Me: What compelled you to revisit “The Economics of Digital Comics“?

Todd Allen: Too much has changed since I wrote the last edition of the book in early ’07.  I’d actually started the background research for an update in the summer of 2010, but every time I’d start to make progress, something would come up and pull me away for 6 months.  Eventually, I had a break in the schedule and decided I was just going to hole up and finish the update.  I’d been away from the book for about a year at that point and it was almost like starting from scratch.  There was a LOT of change from 2013-2014.

In general, I think it’s important for people who want to work in the comics field to know where the money flows from.  How do publishers make the money that they give to you?  How do comics work if you want to go it alone?

When I started documenting these models back in ’02-’04, comics were in very shaky shape and I wanted to make sure people knew what their professional options are.  It’s not nearly as dire a landscape right now, but it’s still important to know the different markets, what your options are and whether you’re being treated fairly.

Geek To Me: What changes did you see in the market from when you did the first version of the book to this current one?

The fundamentals of day to day webcomics are similar (advertising is a little easier to get), but everything else has evolved.

END_OF_DOCUMENT_TOKEN_TO_BE_REPLACED

Fans of the fairy-tale film “The Princess Bride” won’t soon forget Cary Elwes and his character “Westley”, the farm-boy who won the heart of Robin Wright’s “Buttercup” with three words: “As you wish.”

But Elwes himself will admit that he wrote his book “As You Wish: Inconceivable Tales From The Making Of The Princess Bride“ because he was afraid that his own memory would fail him eventually.

always wanted to write something, I didn’t know quite what.” Elwes explained as we spoke via telephone. “And it was the 25th anniversary that we had at Lincoln Center in 2012, we were all asked ‘what was the best memory’ for me.

“And I really couldn’t put it down to one moment or one scene, or anything. For me the whole experience was so joyful. And that’s why I wanted to write the book and share that joy with the fans before the memory started to fail.”

While he did keep a short video diary, which became an “extra” on “The Princess Bride” anniversary DVD release, he hadn’t kept notes during the film’s production.

“I didn’t keep a diary or a journal, which I wish I had now in hindsight,” Elwes admitted. “Luckily Norman Lear gave me all the call sheets for the film, and I went through them all and I started to remember exactly where I was each day.”