Ever since he left Saturday Night Live, Andy Samberg has done a pretty good job of staying in the pop-culture limelight, breaking out like other former SNL cast members in new television and film projects. Now the Brooklyn Nine-Nine star has a movie coming out on Blu-Ray and DVD where he plays a pop star who is trying to remain relevant.

The film is a comedy called POPSTAR: NEVER STOP STOPPING and it was written by Samberg and his Lonely Island homies. I’ve got the details about the Blu-Ray/DVD release in the following press release. And I’ve got digital copies to give away to a couple lucky Geek To Me readers! 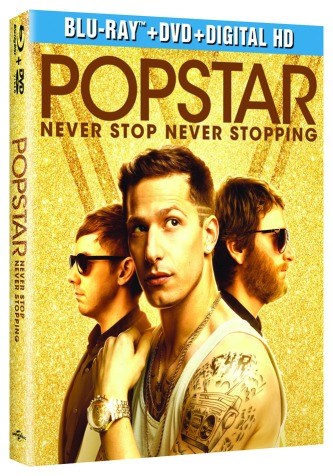 Universal City, California, July 12, 2016 – Andy Samberg stars in this hilarious comedy as a former boy-band member trying desperately to salvage his failing solo career, coming to Digital HD on August 16, 2016, On Demand on August 30, 2016, and Blu-rayTM and DVD on September 13, 2016, from Universal Pictures Home Entertainment. This side-splitting comedy goes behind the scenes as music sensation Conner4Real (Samberg) finds his popularity plummeting after a disastrous album release, leaving his fans, sycophants and rivals all wondering what to do when he’s no longer the dopest star of all. Popstar: Never Stop Never Stopping on Blu-rayTM and DVD comes with over an hour of outrageous bonus features, including deleted scenes, a gag reel, celebrity interview outtakes and more!

(More info and contest details after the jump!)

END_OF_DOCUMENT_TOKEN_TO_BE_REPLACED

After teaming up with Scooby-Doo and the gang at Wrestlemania, the Superstars of the WWE are going “pre-historic” and hitting the road to the town of Bedrock and an encounter with The Flintstones!

Check out the details in the following press release, watch the trailer, and then catch up with me for my commentary at the bottom of the post!:

NEW YORK, NY (January 15, 2015 )– The Flintstones join forces with WWE and go back to the Stone Age in the all-new animated film, The Flintstones & WWE: Stone Age Smackdown, co-produced by WWE® Studios and Warner Bros. Home Entertainment. Timed to debut leading into WrestleMania 31, this all-new original movie is available on DVD, Blu-ray Combo, and Digital HD for the first time on March 10, 2015. Rated the #2 greatest cartoon of all time by TV Guide, the Flintstones’ return to the center ring will be sure to deliver high-octane action for fans of all ages.

Watch the trailer after the jump!

END_OF_DOCUMENT_TOKEN_TO_BE_REPLACED

I have to admit, when I heard that the Disney cartoon show “Phineas and Ferb” was going to give its own take on “Star Wars: A New Hope”, the first thing that crossed my mind was “didn’t Family Guy already cover that?”

(Geek confession: I often annoy friends when I declare that I don’t find “Spaceballs” all that funny since I read essentially the same jokes in “MAD” and “Cracked” magazines.)

So, you could imagine my delight when the episode finally aired and made me laugh in ways I didn’t expect.

What I didn’t take into account was that the humor of the “Family Guy” specials skewed towards adults, while the fun that Phineas and Ferb have with the Star Wars mythos is more family friendly. (Which is not to say that there wasn’t any black humor in the episode. I mean the line “And you thought we would die in space” straight up made me laugh out loud. For realz.)

Anyway, I really enjoyed it, and since a special edition DVD of the episode just hit shelves this week I’ve got a “Phineas and Ferb/Star Wars” prize pack to give away!

How can you win this ginchy gift? I’ll tell you how after the jump!

END_OF_DOCUMENT_TOKEN_TO_BE_REPLACED

Guess what my fellow geeks, nerds and gamers? I’ve got another contest! This time it’s coinciding with the release today of MORTAL KOMBAT: LEGACY II on Blu-Ray!

Now, this is going to be a bit tougher than the STAR WARS: REBELS contest I currently have going, but if you’re a true MK fan and have decent “google fu” you should be able to win it. And the Grand Prize is pretty sweet!

First up, here are the deets on the new Blu-Ray edition of MORTAL KOMBAT LEGACY II:

Originally debuting exclusively on Machinima in September 2013, the web series became an instant favorite with more than 19 million views.

END_OF_DOCUMENT_TOKEN_TO_BE_REPLACED

It is a time of great rejoicing in the galaxy…

After premiering on the Disney Channel earlier this month, the new animated series STAR WARS: REBELS will be making its debut TONIGHT on Disney X D! (Check your local listings.)

I attended an advanced screening of the series pilot, and as a “classic trilogy fan” I was taken in by how much the series ‘felt’ like the films I grew up and fell in love with. There is a definite vibe to this series that sets it apart from “The Clone Wars” which preceded it.

If you haven’t seen it yet, here’s the skinny on STAR WARS REBELS:

“The story unfolds during a dark time when the evil Galactic Empire is tightening its grip of power on the galaxy. Imperial forces have occupied a remote planet and are ruining the lives of its people. The motley but clever crew of the starship Ghost — cowboy Jedi Kanan, ace pilot Hera, street-smart teenager Ezra, the “muscle” Zeb, warrior firebrand Sabine, and cantankerous old astromech droid Chopper — is among a select few who are brave enough to stand against the Empire. Together, they will face threatening new villains, encounter colorful adversaries, embark on thrilling adventures and become heroes with the power to ignite a rebellion.”

I’m really looking forward to seeing what Dave Filoni and his merry crew come up with in the seasons ahead!

Now, to celebrate the series debut on Disney XD, the folks at Disney has given me 5 COPIES of the STAR WARS: REBELS DVD to give away! And yet again I’m doing so with one of my ridiculously easy contests!